EFT Is a fast-evolving treatment within the field of Energy Psychology. It is often referred to as « Psychological acupressure », the technique works by releasing blockages within the energy system which are the source of emotional discomfort. These blockages in our energy system, in addition to challenging us emotionally, often lead to limiting beliefs and behaviours and an inability to live life harmoniously.

Resulting symptoms are either emotional and/ or physical and include lack of confidence and self esteem, feeling stuck anxious or depressed, or the emergence of compulsive and addictive behaviours. It is also now finally widely accepted that emotional disharmony is a key factor in physical symptoms and dis-ease and for this reason these techniques are used on physical issues, including chronic illness with often astounding results. As such these techniques are being accepted more and more in medical and psychiatric circles as well as in the range of psychotherapies and healing disciplines.

An EFT treatment involves the use of fingertips rather than needles to tap on the end points of energy meridians that are situated just beneath the surface of the skin. The treatment is non-invasive and works on making change as simple and as pain free as possible. 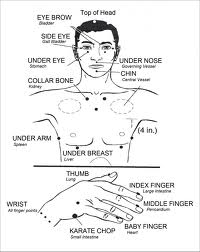